They always get the best positions 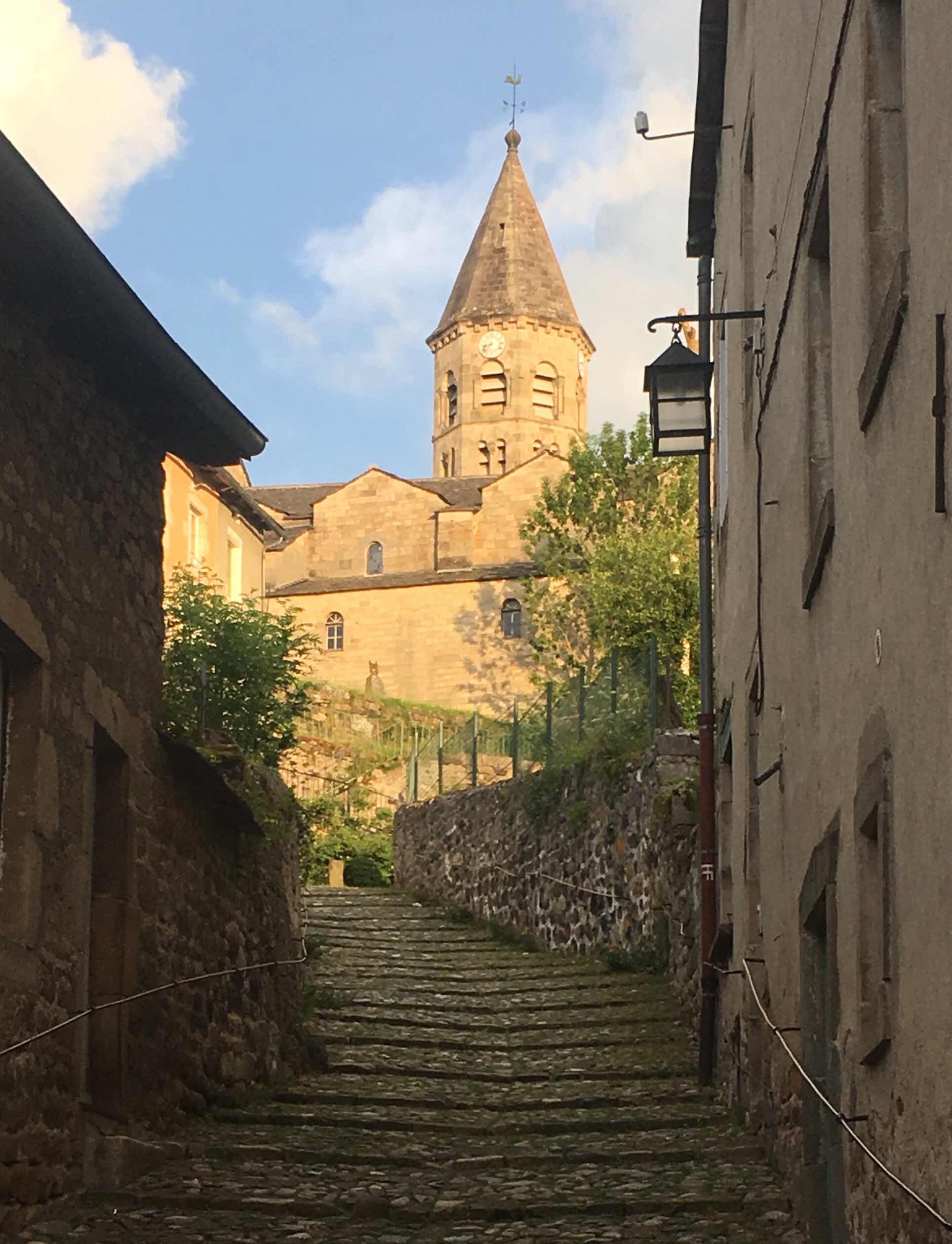 I wonder how long the railway strike will last. The few people I have spoken to believe the government will win. Certainly, many people are being hurt. Martine, for example, who runs the gite, says that her business has really been affected. The walkers aren’t passing through in the numbers that they used to.

On the advice of Martine I was following the shells, not the red and white markings. She said that former route was shorter and more beautiful. It turned out that the routes coincided for most of the way but at the end they differed considerably.

I set out on a farm road around the edge of the valley climbing slightly towards Araules. To my right were the volcanic plugs. I tried to imagine them millions of years ago, thrusting up through the older rock spitting fire and spewing forth lava.

A little way out of town  I passed some young cows in a pen in the corner of a field. They were restless, shifting about nervously in their pen displaying not the typical bovine curiosity, but fear and I anxiety. These poor animals! I think they knew their days were numbered. Sure enough, some farmers arrived in a tractor pulling a large wagon. They were off to market.

I believe that the world’s cattle contribute one tenth of the worlds pollution. Not as much as oil, though.

I read a disturbing article this morning which maintains that for the the government’s gamble in buying the Kinder Morgan pipeline to pay off, its own proposals to prevent climate change will have to fail. For if the world succeeds in existing on other forms of energy then there won’t be a demand for Canada’s heavy oil at all.

I should explain that the pipeline in question, an addition to an existing pipeline, is necessary to get Alberta’s tar sands oil to the coast. It is supported by most Albertans, and many British Columbians, but opposed by the BC government under extreme pressure from the Green Party, which keeps them in power. To avoid a serious rift in Canada the federal government has supported Alberta and the pipeline, even against its own environmental principles. That’s an oversimplification of the most serious issue to face Canada in years.

I walked through Aroules, up along a wide bitumen road into the forest, and along a narrow path towards the highest crossing on this Camino. But it was nothing compared to previous brutal climbs, because I have been climbing steadily since crossing the Rhone. Today’s gain in elevation was only  six hundred feet.

I passed an old rugged cross, well, no longer rugged, but weathered, still standing but much eroded, rather like the Church itself. 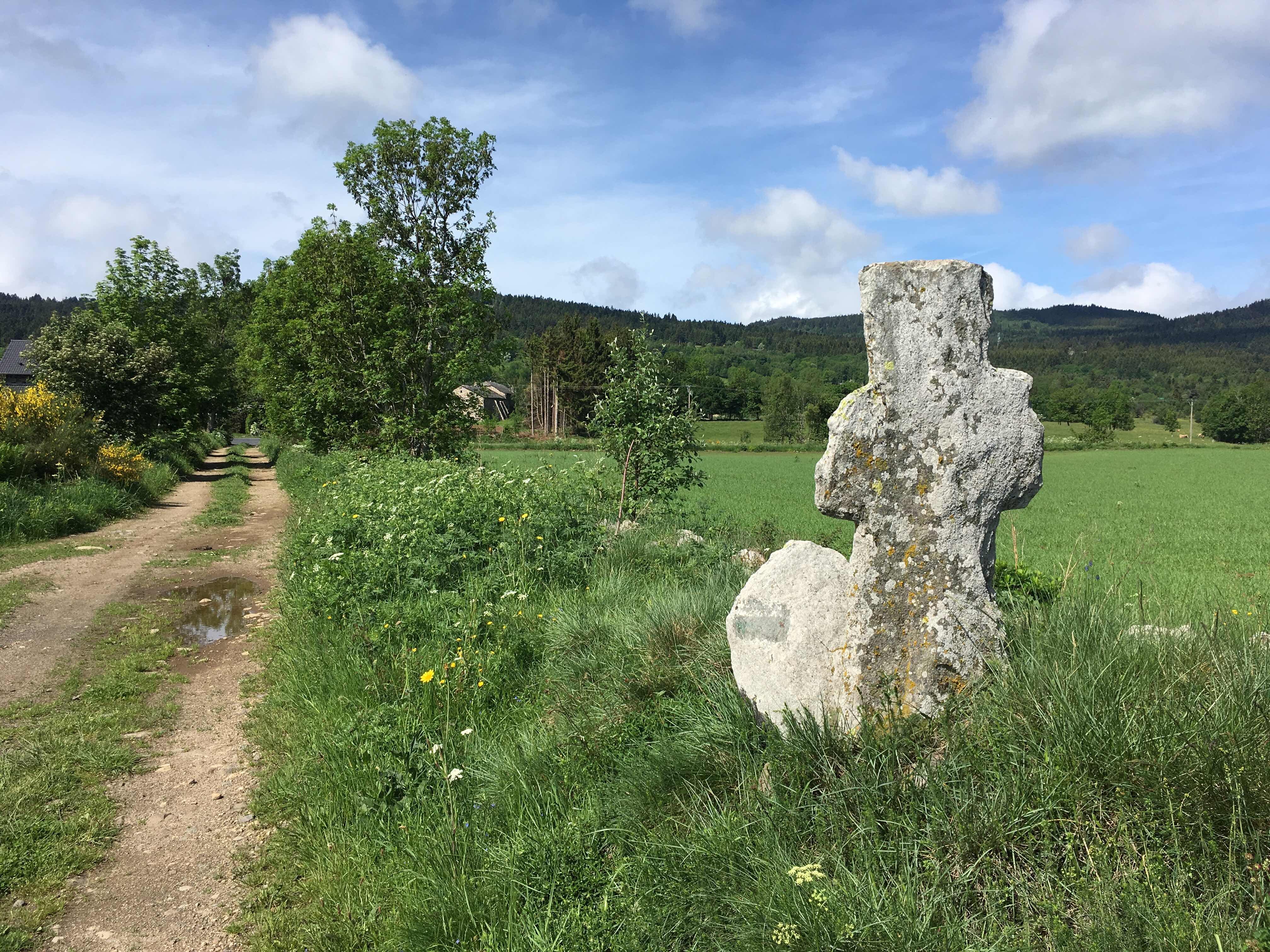 I went to a Billy Graham Crusade once, in my Presbyterian youth. What I enjoyed most, I remember, was the singing of George Beverly Shea. I didn’t go forward, but many did. Yes, they were gullible, but nothing compared to the congregations of today who contribute towards their pastor’s new jet because he tells them that Jesus said he had to have one to be closer to God.

Up to the summit and then down the other side towards the spectacular village of Queyrières. Some villages form in the valleys where there is water: others on a hill for defence. Half way in between, Queyrières seems to have huddled around a great monolith for comfort. 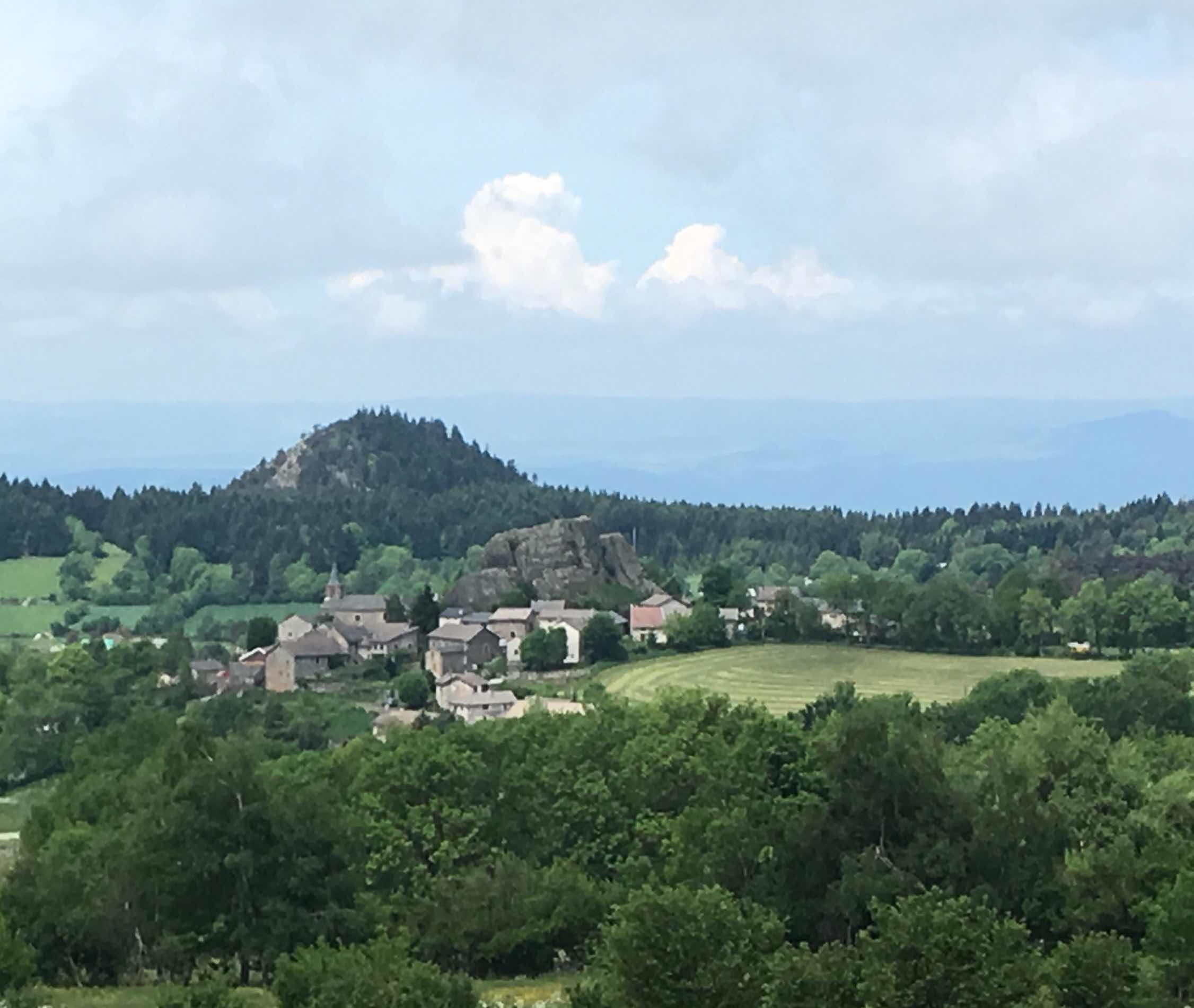 I walked along the road through the hamlet of Monedeyres and down a valley between two plugs, one of them exposing a steep basalt wall, perhaps a challenge for rock climbers.

Arriving at a forest, the path split, the GR heading left up towards one of the mountains, the Chemin de Saint-Jacques following the river down to the Moulin Guérin, a mill on the river still in use, apparently. The path followed the river down to the village of Saint-Julien-Chapteuil, where I am spending the night in the gîte. At the edge of the town, I noticed a particularly nice bed of iris. 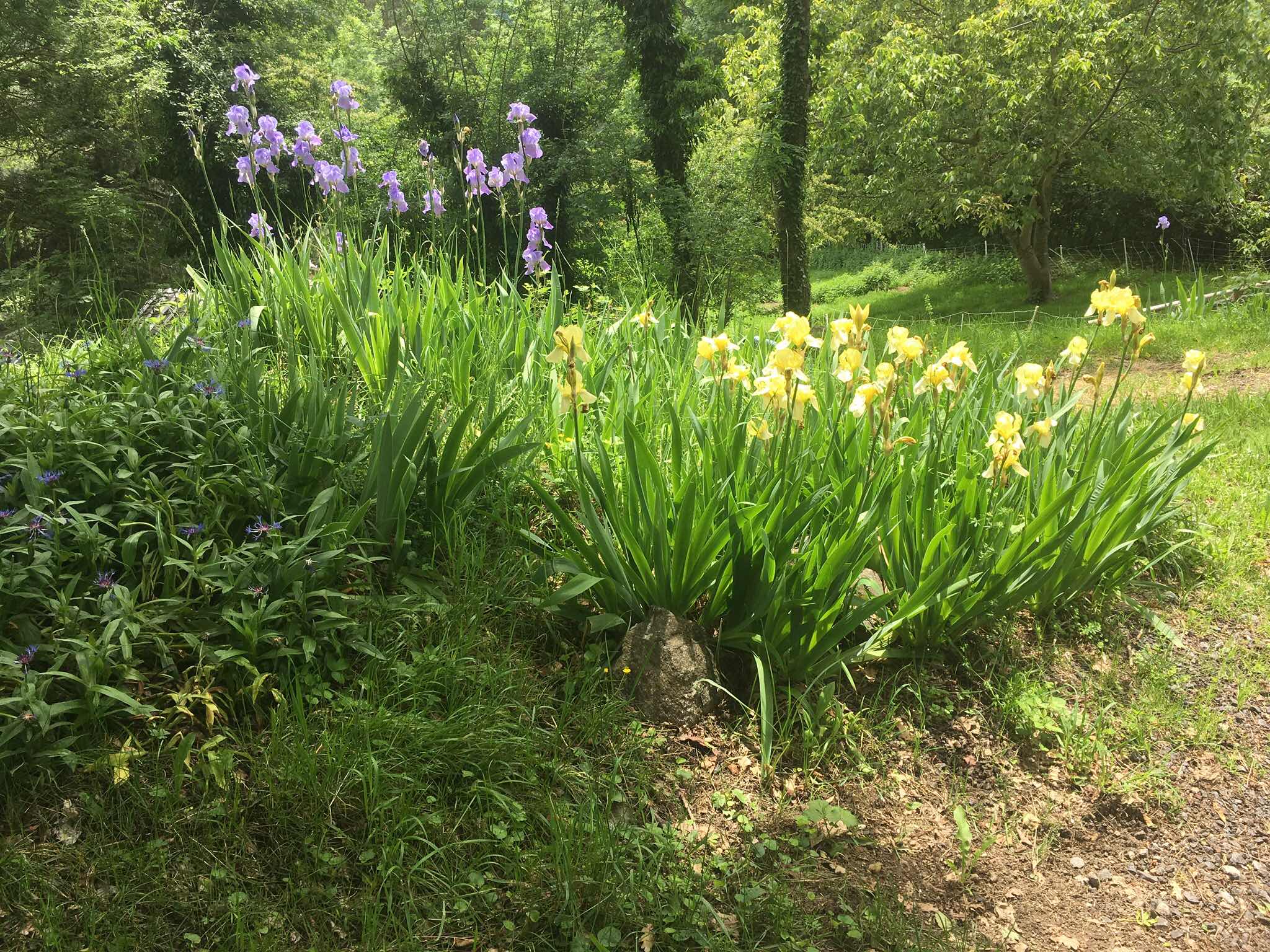 Installed in my private room at the gîte, once again I was the only one there, I decided to visit the church, a restored eglise Romane. To get there was a Camino in itself. A walk to the top of the town, a climb up a stony path, and then another climb up some steep steps. How did the faithful infirm get to mass?

After church, I had a choice of nearby eating places: the Restaurant Vidal where the entrees started at €25 and the mains at €40, or the Snack Bar du Meygal, Chez Mich. I chose the latter. On arriving at the door, the hostess said, I’m doing pizza tonight. I said, I’ll have a pizza.

Posted by Carolus Peregrinator at 12:06