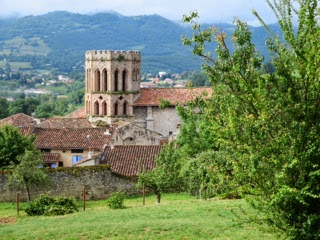 It should have been an easy day, and it was really, but for a couple of brutal climbs at the end. One was justified; the other, not. I have mentioned before how the GR will do any thing to get you off the road, even to the extent of taking you around three sides of a rectangular field if the fourth side is along the road.
One of the loops off the road today entailed a rugged climb, over dirt and slippery rocks, a switchback, each section hopefully the last, but no, still on and up, the top at last, and then down again, all to avoid a short section of the highway. 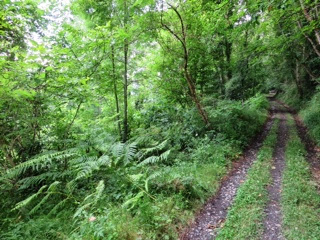 It was a little confusing leaving town this morning, since the sign was pointing one way but I knew I had to go in the other. The first person I asked for help gave me Manuel's response. "I know nothing," he said. The second person pointed me in absolutely the wrong direction. "It's down there," he said. A little later on, but still in the suburbs, after I had been misdirected by a GR sign sending me to the left,  the third person said, "She went that way," and pointed down the street. So I knew that Monique, a French pilgrim I had met several gites ago, had also been misled by the sign. "You cross over a field and go over a footbridge," he said. The fourth person said I couldn't cross the field because there were savage dogs in it.
I knew I had somehow missed the path, so I followed the highway which was heading in the same direction. Eventually, I rejoined the GR which passed through several villages along the river. Then it crossed the road and took off up the hill, up and down, up and down, eventually to arrive at Arrout.
I passed a very convincing artificial hedge. It was so well groomed and had me fooled for a moment. Strips of green plastic, looking for all the world like leaves, were woven into a wire mesh fence. No watering, no trimming. Very effective! And then I saw a little fox terrier carrying a tennis ball. He would stop, put it down, but never leave it behind. His master explained that he always took it with him when he went for a walk.
It was fortunate that the gite where I had intended to stay was closed. Instead, I stopped a few kilometres earlier at a Centre de Vacances, la Maraude, at Arrout. The last institution of this kind where I stayed was drab and depressing, but this was just the opposite. It was a huge converted farm house. I had a room to myself, in what was once the hayloft, and the food, mostly from their garden, was excellent. All for 26 €. 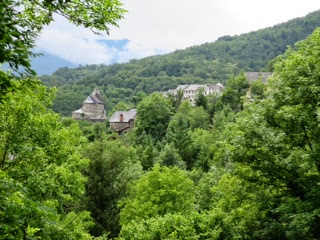 It was a colony, offering, as their card puts it, "des sejours, nature, pour les enfants". But it was also an Esperanto study centre, offering courses and conferences in the language.Now I, in my ignorance, had thought that Esperanto had died a natural death, especially with the rise of English as an international language, but no, it is alive and well, if not exactly kicking. Apparently, it was taught in schools in France during the wars, but not since.
They all spoke the language fluently, and spoke of it with great enthusiasm.
Posted by Carolus Peregrinator at 03:39